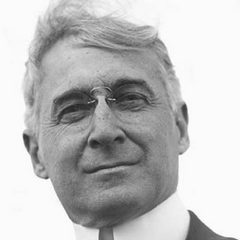 One of the most famous American financiers who had the strongest influence on the country's politics is Bernard Mannes Barukh. Having achieved unprecedented success thanks to speculations with securities, he has built a further strategy of success on investing in politicians. Starting the ascent of the career ladder from the lowest position, by the age of 33 earned a million and founded his own firm. Bernard Baruch's biography is proof that the most striking achievements often belong to people who started from scratch.

Bernard Baruch was born in 1870 in Camden to Simon Baruch, a physician who made a significant contribution to the development of surgery and physiotherapy. At the age of 11, Bernard moved with his relatives to New York, where he was educated and began working as a messenger in a brokerage firm. Performing small errands, he learned from the example of traders and collected news. At the age of 28, with the help of his relatives, he bought the right to bid for the New York Stock Exchange. At the beginning of his career he suffered several serious setbacks, actually losing all the money. The deal, which provided a turning point in his professional development, was concluded at a cost of $500, provided by his father. Some historians claim that these were the last savings of the family.

The methods of Bernard Baruch, who preferred to trade based on the general movements of the market and often going against the general trend, were considered extraordinary. Not relying entirely on fundamental factors and insider information, he sometimes caused disapproval of contemporaries. In particular, John Morgan called him a cheater. However, Baruch's approach proved effective: he could soon afford direct investment. A characteristic of his style of work was the emphasis on self-reliance: avoiding participation in trusts, he traded alone, for which he was dubbed the "Lone Wolf of Wall Street".

The start of the course of investing in politics can be considered 1912, when he financed the election campaign of Woodrow Wilson, thanks to which he was awarded a position in the Office of National Defense. One of the key prerequisites for the successful outcome of World War I for the United States was its effective management of the industrial complex. At the end of the war he participated in the Versailles Conference. His direct interest and participation in the national gold and silver buying programme in 1933 is confirmed by the vast majority of historians.

Barukh held various positions in the administrations of American presidents until 1965, when he died at the age of 94. In 1946, he participated in a united nations commission on a nuclear disarmament project that went down in history as the Baruch Plan. The authorship of the financier also belongs to the term "cold war." The book "My Story" is best known among traders, which outlines both his economic and socio-political views.