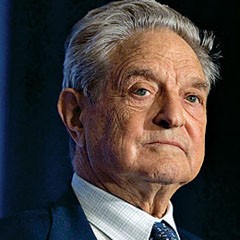 Billionaire George Soros is known to the world not only as a brilliant financier and analyst, but also as a social activist, philanthropist. He is the author of many books and articles that are filled with the idea of organizing an open society around the world.

George Soros was born in Budapest, in 1930, into a Middle-income Jewish family. His father was a lawyer and publisher, a prominent figure in the Jewish community in Budapest. During the repression, forgery of documents, the Soros family managed to avoid persecution, and they safely emigrated to the UK in 1947. Soros was 17 at the time, and decided to enroll in the London School of Economics, which he graduated in three years.

During his life, Soros managed to change many professions: a salesman in a gallantry shop, a salesman, a waiter, an apple picker, and even a porter at the station. But he always did not part with the hope to get a job in the bank. As a young man, he kept a diary in which pedantically recorded all his expenses and income.

After graduating from the London School of Economics, he gets a place in the arbitration department of the investment company. In 1956, Soros arrives in the United States, at the invitation of his friend's father from the London school, who owns a small brokerage firm. In 1963, Soros began his work at Arnold and Bleichreder, one of the most well-known and reputable companies, specializing in investments abroad. In this company, Soros, who rose to the position of vice president, decides that he is more effective in the role of investor than the top manager. Soros convinces the company's management to establish two investment funds First Eagle and Double Eagle. After regulators limited Soros' ability to manage these funds, he paired the famous quantum with Jim Rogers, the fund that brought him the bulk of his fortune. The fund's profit for the first ten years of its existence was 3365% per year.

George Soros is known all over the world not only as a great investor, but also as a philanthropist, a man who is sensitive to science and art. But Soros, along with positively formed and negative – he is often accused of doing most of his transactions thanks to insider information and extensive connections in financial circles around the world.
One of Soros's most famous financial transactions was the so-called "Black Wednesday" on September 16, 1992, when he opened a short $10 billion position. pound and managed to earn more than 1 billion dollars per day. pounds, forcing the Bank of England to make a massive intervention. It was from this day that Soros was called in the press – "the man who brought down the Bank of England."

Becoming a very influential and rich man, he demonstrates amazing modesty in everyday life and does not show the of people of his status. He lives in his apartment in Manhattan, modestly dresses, does not buy sports teams and expensive sports cars. However, when his personality directs his energy to political or financial affairs, you can see at once – its scale is huge.

In addition to financial talent, George Soros has also a literary one. In such books as "The Alchemy of Finance," "Crisis of World Capitalism," "Supporting Democracy," the reader will be able to appreciate the enormity of the author's thinking and familiarize himself with his professional view of the situation that has developed in the political and political economic sphere of different countries. He also published an autobiographical book, Soros about Soros, in which he opens the veil of his personality, full of mysteries and myths. All his books are written in accessible and very fascinating language and remain relevant, in completely different readership.