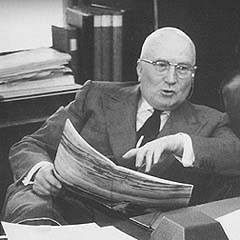 Gerald Loeb named by Forbes journalists the most quoted trader, comes from San Francisco. He was born in 1899 in the family of a wine merchant. Loeb's father moved to the United States from France in the hope of starting his own business, but his business was doomed after a seven-point earthquake in 1906 that left three-quarters of the city's population homeless.

The experience as a child hardened the character of Gerald Loeb: at the age of 22 he got a job in a brokerage firm as a trader. At the beginning of his career he became well known in professional circles due to the fact that he did not sell securities, which he doubted. An extraordinary approach to business and an undeniable talent of financier for eight years helped him to rise up the career ladder and become a partner in the firm for which he worked.

Predicting a stock market downturn in 1926, Gerald Loeb saved his capital as well as the deposits of his investors from the "Wall Street Collapse" that started the Great Depression. The good decisions that came during this period guaranteed him the status of one of the most competent financial experts. Taking the post of vice-chairman of "E. F. Hutton and Co., he was a senior executive until his retirement. Officially, Loeb's career at E. F. Hutton and Co." ended in 1965.

As an outstanding financial analyst, Gerald Loeb devoted a lot of time to publications. His articles have been published in such well-known publications as Forbes and the Wall Street Journal. His book "The Struggle for Investment Survival," which sold hundreds of thousands of copies in its first year (1935), is now considered a must-read by labor in the circles of economists. In contrast to "Securities Analysis" B. Graham, it was written in plain language, understandable to people without a specialized education. Published after his retirement, "Fighting for Profits in the Market" is also a success among readers.