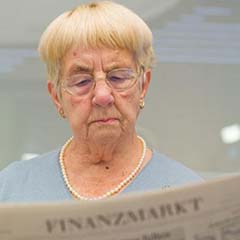 The media often refer to Ingeborga Mootz as "an old man of a million", which, by and large, best characterizes her success story. This elderly lady is not as wealthy as, say, Bill Gross or Alan Greenspan, and its impact on the world economy is not as tangible. However, today it is considered to be one of the most famous traders of the European Union. She was born in 1922 and started trading on the stock exchange in the 90s when she was in her 70s. With no special education, experience and even a computer, Ingeborga Mootz made 100% profit a year after the start of trading on the stock exchange.

In numerous interviews that Ingeborga Mootz gives to journalists from different countries, she emphasizes two things. First, the strategy it is guided by is very simple. Second, she calls the earned wealth a repayment of fate during the years of poverty.

Frau Mootz was born in Gissen, which is considered a university town. Her parents were known as poor and, to top it all off, they had many children. After marrying, she found that her husband was an extremely thrifty person who also opposed her employment. Tired of the stinginess of his faithful, at one point Ingeborg Mootz informed him that he was going to trade on the stock exchange.

At first it seemed that the conversation did not end, but after the death of her husband, she discovered that he had purchased shares of VEBA worth about 40,000 marks. It was they who became the starting assets and gave the first significant profit, which allowed to buy securities Commerzbank and IKB DeutscheIndustriebank. After selling them a year later, Frau Mootz earned 130%. A year later, at the request of her relative, she took control of her capital and earned her a new home.

Further capital growth of Ingeborga Mootz is associated with investment in banking structures. At the same time, as she herself notes, money should be invested only in developed enterprises, whose history has more than a hundred years, or in their subsidiaries. The main indicator of the success of the organization is the DAX-30 index published by the Frankfurt Stock Exchange. Frau Mootz is convinced that anyone can use its system – it is enough to start with reliable shares worth about 1000 euros. At the same time, she insists that modern society knows too little about investment and at the same time is psychologically dependent on every minute consumption. Both of these problems, in her opinion, are artificially supported by banks and the government.

Written by Ingeborga Mootz, the book "The Exchange Detective" initially met with sharp criticism from publishers. In fact, no one wanted to publish a paper about the stock strategy written by a housewife. Deciding that her views on securities trading deserved attention, the author published "The Exchange Detective" on the Internet. Counting how many people downloaded Ingeborga Mootz's book, publishing houses began to compete for the right to publish it. To date, Frau Mootz is more correct to call "old woman for two million euros", because, according to some reports, she has already overcome this mark.