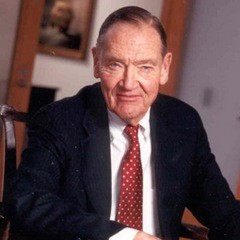 The main achievement of John Clifton Bogle is the company founded by him Vanguard Group. During his time as chairman of its management, the amount of assets entrusted to Vanguard Group reached $800 billion. The concept of mutual funds, based on giving priority to the interests of depositors, has been implemented in this company. John Bongle's books are equally well known, in particular, "Mutual funds from the point of view of common sense. New imperatives for a reasonable investor." This edition, which has reached the status of a bestseller, is a universally recognized classic within its genre.

The year of the investor's birth is the same as the year of the beginning of the Great Depression. His family, who lived in New Jersey at the time, were fully affected by the economic crisis. John Bogle has secured a scholarship that fully covered his education at the Blair Academy boarding school. He graduated from Princeton and later attended evening and Sunday courses at the University of Pennsylvania in Philadelphia.

In 1951, Bogle joined Walter Morgan, the founder of the Wellington Fund, one of the oldest foundations in the United States. The rapid ascent up the career ladder to the position of the head of the management company Wellington Management ended with one of the biggest failures in the biography of John Bogle. He was sacked as a result of "extremely unreasonable" corporate mergers, and Wellington Management lost about $600 million. "There is one positive thing about this shameful and unforgivable mistake, which is a reflection of immaturity and beliefs not confirmed by any facts: I learned a lot," the investor recalls.

In 1974, John Bogle set up his own investment company, which was later developed to become the world's second largest mutual fund. Under the influence of Yu. Phamand P. Uh. Samuelson became interested in index funds and created the Vanguard 500 Index Fund, which remains an important part of the Vanguard Group. Today, Bogle is also a member of the Blair Academy Board of Trustees and advises one of the Yale SOM centres. In 2005, he was awarded an honorary doctorate from Princeton University. Among other things, he became famous for his media appearances on the prospects for the development of index funds and their advantages over classical mutual funds. He considers common sense and the desire for simplicity to be the basis of his investment strategy. In 2004, Time magazine mentioned him in the ranking of hundreds of the most influential people in the world.