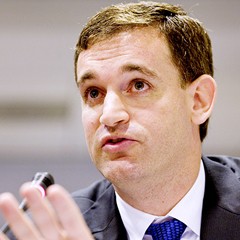 Famous trader and financier John Arnold was born in the United States of America in 1974. Today he is the head of Centaurus Energy Advisors, LLC.

Arnold began to build his career immediately after graduating from Vanderbilt University. As a student, he planned his entire career. Most teachers saw him as not just an ambitious student, but a future talented entrepreneur.

John started his career at Enron as a trader, and a few years later he became involved in the oil and gas industry. He tried to learn how to trade through the Internet, learning all the wisdom of an electronic account. In 2001, he received an $8 million prize.

John Arnold's strength is strategic planning for his business. He has a well-developed logical thinking. All his actions he counted a few steps forward, and this led him in most cases to wins. The ability to earn independently and not depend on anyone for John has always been a priority. Therefore, to his dream – to become the most successful and richest man – he went with great perseverance and constant meticulous work. Methodical work on oneself, self-education and gaining new knowledge in various fields have become its main goals.

In 2002, Enron went bankrupt, and John decided to start his own company. He calls it "Centaurus" and its capital is $3 billion. John Arnold begins to collaborate with such significant people as Bill Perkins, Jeffrey Welch, Greg Wollay and Conrad Goerle. He was able to pick up a team of professionals who helped him lead the company.

When Amaranth Advisors collapses, Arnold decides to take a risk and lends money. But in 2005 he gets everything with 150 percent revenue. It is said that its profit was 2 billion from the invested 1.5 billion.

John Arnold – one of those talented and successful businessmen who by the age of thirty-three reached unprecedented heights. In 2007, he was ranked 317th on the list. He is now recognized as the youngest billionaire financier in the world. In 2008, his fortune was estimated at $1.5 billion.

For young traders, it is an excellent guideline: its success is the result of hard work.