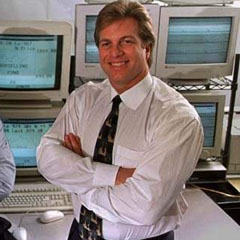 Lewis Borselino is one of the most extraordinary and successful traders on futures contracts for the index of SP. He worked for 18 years on the Chicago Stock Exchange in the "pit" – a platform for traders, while most, could not survive there for two years.

Borcelino's roots go back to sunny Sicily, where his grandfather is from. Lewis' father worked for a cargo company, where he often stole from his employers, and after a while was arrested for links to the mafia. He wanted a very different future for his son.

At first, he traded gold futures, and then switched to trading the index of the S-P on a new platform. At that time, few people suspected that this tool would be very profitable for speculators, and Borselino brings to the site his friends and brother, and later they become the largest group on the site.

During the years that he traded in the pit, there were a huge number of major international events: the coup d'etat in Russia, the gulf war, the Asian financial crisis. Anyway, Borselino is sure that he will always trade on the stock exchange, regardless of the world crises and social upheavals.

On the financial crisis in Russia, he managed to earn more than 2 million. dollars, but then he was already 40 years old, and he decided to leave such an emotional stock trading and do something calm.

At the moment, Lewis Borselino owns Borsellino Capital Management, which specializes in technical trading. Also, he often appears on TV screens as an expert and analyst, shares on the Internet tips with newcomers.

Lewis Borselino is the author of several books: "Daytrading: From Pit to Computer," "The Date Trader's Note" and autobiographical, "Daytrader. Blood, sweat and tears of success."

They are popular not only with people associated with trading, but also with ordinary readers who are interested in the person of the author himself. His path to the top of trading is a consequence of purposefulness and fanatical attitude to the business of his life.