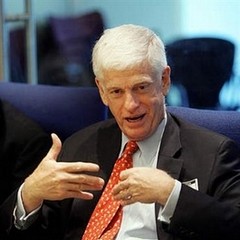 American stock trader, investor and financial analyst Mario Gabelli in 2006 took the 346th position in the ranking of the richest Americans according to Forbes. Its net assets were estimated at a billion dollars as of 2011.

Today, this financier is known primarily as the founder, president and chairman of the board of directors of the investment organization GAMCO Investors. Founded in 1977 as a dealership, it developed into a corporation with a branched package of services and $30 billion in capital. Mario Gabelli's work at GAMCO is paid on a commission: in 2006, he earned $58.2 million, more than any other top executive on Wall Street. A year later, the commission for his services amounted to 70.9 million.

Mario Joseph Gabelli was born in 1942 in the Bronx, the son of Italian immigrants. He was educated at the Jesuit school Fordham Prep. As Mario Gabelli himself recalls, even as a child he had fun for the sake of reading articles on economic subjects, and bought his first shares at the age of 13. The future financier has secured a scholarship to study at Fordham University, which he graduated with honors. In addition, Gabelli received an MBA from Columbia University's School of Business.

After graduating from the university, he took the position of financial analyst and in Loeb, Rhoades'Co. His first specialty was the auto parts and farm equipment markets; he was later entrusted to oversee the media and broadcasting. While studying companies, he applied the value-based investment theory developed by Benjamin Graham and David Dodd. After several years of work, Mario Joseph Gabelli proposed his own version of this model of market research and valuation.

In 1976, he founded the brokerage firm Gabelli'Co, followed by the creation of GAMCO Investors. By 1981, the company's portfolio contained 81 accounts with a total capital of about 33 million. A feature of Gabelli's approach was earnings in enterprises whose activities were on the decline and which were later absorbed by other companies. Despite some pessimism about such a strategy, it allowed the financier to bring income to investors even in the years when other managers were failing. Mario Gabelli himself commented on his methodology as follows: "To stay afloat, I do not need a growing market."

Video about the success of Mario Gabelli, as well as books